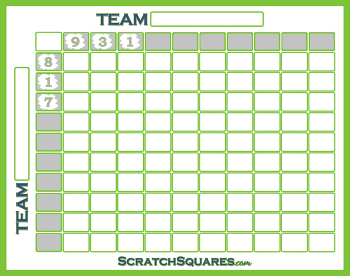 
All of our Scratch-Off Cards are completely random. No matter how many cards you order, it is all but impossible to receive a duplicate card.


Due to the size of the products and the ease of processing, the Scratch-Off Squares and the Large 24" x 32" Square Grids on PrintYourBrackets.com are shipped in different packages and will load into two different shopping carts, requiring separate transactions.


Although you see various sports listed on the right side of the screen, all of the 100 square grids are the same. This was done to help track popularity and enhance future product development.


If you have a question please contact us and we will respond as soon as possible.


For entertainment purposes only! Check out how to use our boards for fundraisers, sales competitions, and in bars/restaurants.

How to run a 100 Square Hockey Pool


Once you receive your grids fill in the two team names, this is done by placing the home team in the top box and the away team in the box on the left side. Have participants write their name in the square or squares of their choice.


Once the grid is full simply remove the scratch off material to reveal the numbers that will be used to determine the winning squares. Winning squares are always decided by using the last digit of each team's score.


There are a couple of different ways to determine winners of this pool. The first is to use the score at the end of each period. This is typically a single digit number, but in the rare case a score goes into double digits, you will be using the last digit of the score.


Example of a Winning Square: At the end of the 1st period the home team has 1 and the away team has 0. Find the number 1 in the top row and find the number 0 in the left column, the participant with their name in the square where these two numbers intersect would be the first winner.


The second option is to run this pool during the a playoff series. Instead of using the scores at the end of the periods you will be using just the final score of each game. The total number of winners will be dependent on the length of the series. 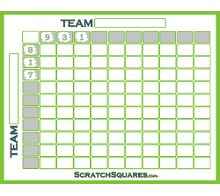 Our unique 100 Square Grid Scratch-Off Sheets are available in a variety of quantities and can be used for any sporting event. No "out of the hat" drawing is needed. Once all 100 squares are full simply scratch off the covering to reveal the numbers that will be used to represent each team's score. 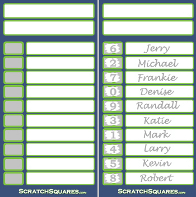 The 10 Line Scratch Cards are perfect for a quick and easy pool with 10 participants or less. Fill the 10 Lines with participant's names and remove the scratch off material to reveal the numbers 0-9. These cards can be used for Football, Basketball, Baseball, Hockey and even Racing, Golf and Boxing. 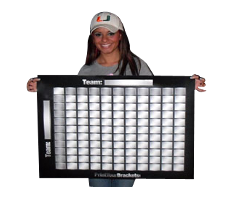 Impress your guests with this 24" x 32" high resolution Square Grid Office Pool. This grid is perfect for your party or to hang around the office! These are available in 100, 50, and 25 square versions, with the 100 square grid also available with quarter lines.